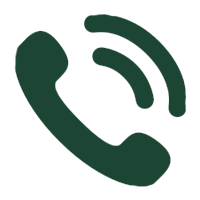 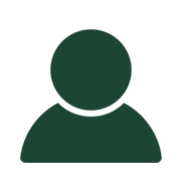 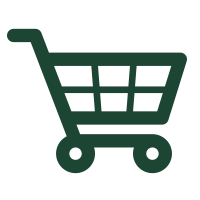 Jim Markey Man's Shop is proud to celebrate 40 years in business this year and we are delighted that Menswear Magazine have acknowledged our achievement with a feature interview in their July edition. Reproduced with kind permission:
'As it celebrates 40 years in business, Jim Markey Man's Shop is nothing short of a Dublin institution. Having been part of the capital's retails landscape since the late seventies. Brothers Alan and Declan Markey now run their late father's company and, together, the pair boasts over 60 years' experience in retail. It is clear to see that the duo shares the same passion and flair for Gents' fashion and style as their parents before them. Here, Menswear chats to Alan Markey about working with his sibling and keeping their late Father's legacy alive.

Drumcondra, the suburb located just north of Dublin’s city centre, needs little introduction. Neither does Jim Markey Man’s Shop, the much-loved, family-run clothing store that has been dressing the men of Leinster since 1977.
Today, it is run by brothers Alan and Declan Markey, and while they have effortlessly kept the business modern, the siblings have admirably remained true to their father, Jim’s, original and simple goal of providing their many customers with top-class service along with some of the best sartorial offerings in the market.
“We aspire to achieve exactly what our father did: good quality clothes combined with great customer service,” Markey says, the pride he feels for his late father clearly evident in his voice. “He enjoyed immediate success when he first opened in the late Seventies, largely on account of the many years of experience he had gathered in retail before going out on his own.”
Jim Markey kick-started his career in retail in the late 1940s and throughout the successive decades that led him to open his own store, the ambitious Dubliner flexed his entrepreneurial and managerial muscles in the renowned menswear retailers, Best and John Taylor. 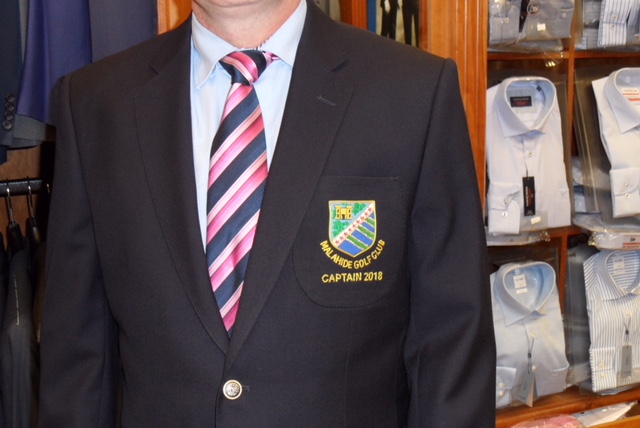 Markey explains: “Having worked in the business for so long, success came relatively easy to him when he first started out on his own. As well, many customers came with him.”
Joining the patriarch in-store was a natural fit for Markey who, in 1982, officially clocked in, having previously spent numerous Christmases and holidays helping out his father and mother, Dorothy, in the family business.
“My father died in 1991,” Markey recalls, “and, after that, I was determined to keep the business going, and in the family.”
His brother, Declan, came on board around the same time as Jim’s untimely passing, and using the skills and secrets of the trade given to them by their father, Jim Markey’s Man’s Shop continued going from strength to strength, culminating in an extensive renovation in 2001.
“The store is now three times the size of the original premises. We had to expand because we were doing so well and we needed additional space to carry our stock,” Markey explains.
Customers – who are predominantly in their 30s and 40s, but run the gamut of ages and even extend to men in their 80s – paying a visit to the store are sure to find world-class brands such as Bugatti, Meyer, Bruhl, Olymp, Eden Park and Magee on display. However, Markey highlights two particular labels that have always proven to enjoy an edge over the competition.
“Most of our brands are German with a few Dutch ones - we keep the same brands if they are selling – there is a loyalty there between us. We like to support them and they support us. Our main seller is Digel, followed by Casa Moda. Our customers like the fit and quality that they offer.”
Aside from the latest styles, Jim Markey’s Man’s Shop has managed to survive
two recessions on account of numerous factors. In addition to expanding on the their father’s legacy, the brothers have introduced many additional and popular services for their customers that ensure that they keep ahead of the competition.
“We have a full-time tailor working in the store,” Markey mentions, “so, if there is any alterations needed, that service is available. We also stock a wide selection of sizes.”
The store has found particular success with hard-to-find large sizes, which include options that go all the way up to 6XL and chest size 60”. In 2011, the brothers even launched largesizes.ie so men from all over Ireland and Northern Ireland could purchase these plus-sized options at the click of a button.
“At Jim Markey’s, size truly doesn’t matter. Whatever your size, you will be guaranteed top quality menswear and an excellent service,” says Markey.

Always thinking outside of the box, in 2010, the business added Club Blazers to the portfolio of services they offer. This specialised facility provides top-quality blazers and embroidered crests to clubs and associations throughout Ireland.
While always keen to stay ahead of them, Alan and Declan have never seen competition as something negative - in fact, just the opposite.
“The more the merrier!” We find that competition generates additional business,” notes Markey. “For instance, a shoe shop opened across the road and we have really done well as a result.”
Conscious of the increasing need to have a strong online presence, the Markey brothers have embraced internet shopping (their easy-to-use website includes an online store), while they also enjoy an extensive social media presence across Facebook and Instagram.
“We have to be online,” says Markey. “These days, customers look at the brands online before calling into us. It’s an essential aspect of modern-day business if you want to stay competitive.”
Aside from the two brothers, Jim Markey’s also directly employs an additional staff member, David; and as they recently sailed past their 40th anniversary, the business shows no signs of slowing down. 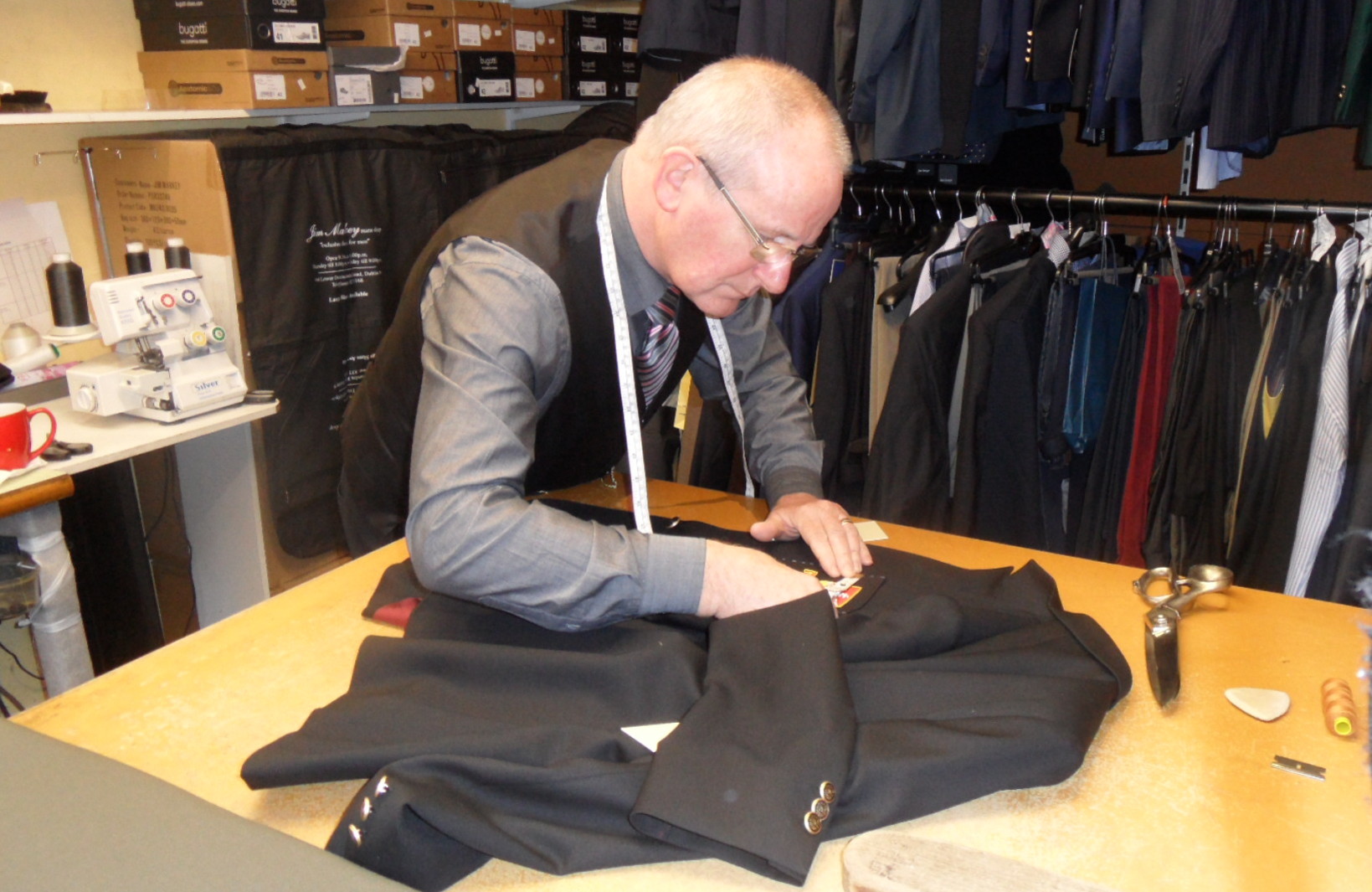 “Hard work,” Markey answers when asked about the reason the family has achieved so much success in such a precarious industry. “You have to keep at it every single day. You have to work every day of the week - sometimes even Christmas! There is no quick-fix. Hard work, always.”
Looking ahead to the future, Markey expects the grafting that he and his family are famed for to continue.
“More of the same! We want to build the company further. We have absolutely no plans to slow down just yet!”
An enviable work ethic combined with a passion for retail and an extensive knowledge of the market has seen the Markey family in good stead over the decades - and, no doubt, it will for many years to come.'
Alexander Fitzgerald, Features Editor
Menswear Magazine
July 2018 Edition 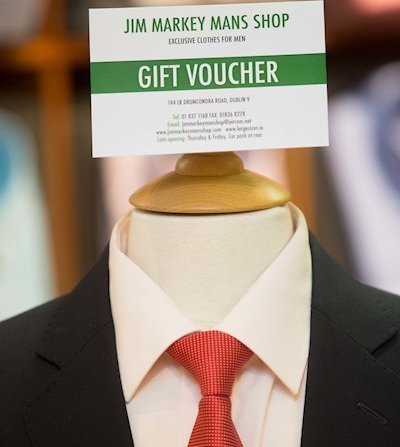 Jim Markey's Man Shop dressing men of all sizes throughout Ireland for 40 years, visit our Drumcondra Store or browse and purchase online.
Tagged as: Publications
Share this post: